Some authors have described H. nigriceps as a subspecies of H. semispinosus, but after the discovery of sympatric occurrence in the Tsinjoarivo region (Goodman et al., 2000), consensus is its status as a separate species.

Description
Mean length 165.2 mm (120-186 mm), no tail. Weight 70-160 g. The species is generally similar in size, shape and colouration to the Lowland Streaked Tenrec (Hemicentetes semispinosus), with certain differences. The pelage is less spiny and the underfur is more developed than in H. semispinosus, giving it a more woolly appearance. The back is covered with a mixture of quills and fur of black colour. Three whitish stripes run from the neck to the abdomen - this contrasts with H. semispinosus, in which the stripes are yellowish. The fronthead is black, again in contrast to H. semispinosus, which has a yellowish stripe down the forehead. The ears are short and partly covered by hair. The majority of quills on the neck are long and detachable. The claws of the forelimbs are rather long and robust. The furry underparts are creamy-white. Towards the posterior dorsal end, the stridulating organ is located, which consists of specialised quills used for ultrasonic communication. The females have five pairs of teats.

Behaviour and Natural History
The species is mostly or strictly nocturnal with a peak activity period normally during the frist three or four hours of darkness. It digs burrows of up to 150 cm length and 15 cm depth from ground surface. During the cold season between May and October, H. nigriceps enters a torpid state of hibernation, which is more pronounced than in H. semispinosus, presumably because of colder conditions in its higher-altitude range. The onset of torpor is stimulated by ambient temperature reductions, day length and food supply, but is also influenced by endogenous rhythms. Its quills serve as a defence against predators (e. g. euplerids or snakes). The animal lifts the quills on its neck into a crest and bucks towards the predator. Little is known about its social structure, although for communication, it employs stridulation as a limited type of echolocation, as well as soft squeaks and calls. The main prey are earthworms.

Reproduction
The female prepares a nest made from soil inside a burrow. The gestation period is between 55 and 63 days and the litter size is one to four (or five, according to one source), with an average of three or four. Its reproductive season lasts from early October to March, which corresponds to the hot and rainy season. The young develop rapidly. The females are sexually mature after only 30 to 35 days, meaning they can reproduce before their first hibernation. Its longevity is between two and three years. 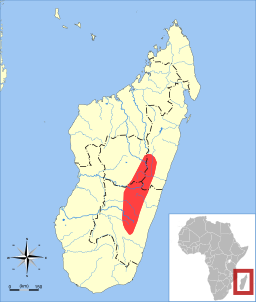 The distribution of H. nigriceps is endemic to Madagascar and is restricted to the higher altitudes on the eastern escarpment and some areas of the central plateau. The range is between the region of Ambatolampy, in the East to Tsinjoarivo, and in the South to the region of Ambalavao. It occurs between 1,200 and 2,050 metres of altitude. According to Garbutt (1999), the Andringitra Massif, south-west of Fianarantsoa, is probably the best place to try to see this species.

Habitat
H. nigriceps lives in humid and dry mountain forests. The species is known to occur in sympatry with H. semispinosus at 1,550 metres of altitude in the Tsinjoarivo region.

Conservation Status
Classified as Least Concern (LC) by the IUCN. The species is common and also occurs in habitats influenced by human acitivity. It occurs at least in one protected area (Parc National d'Andringitra).