Geogale is a monotypic genus.

Description:
G. aurita is a small tenrec with a total length of 107 to 113 mm. Its head-body length is 70 to 76 mm and its tail length is approximately 31 to 40 mm. Its weight averages 6.9 g. Its pelage is soft and dense. The upperparts are pale grey and the underparts ivory-white to creamy-white. Dorsal and ventral colourations are separated by a curved demarcation line. The sides often display orange/salmon-coloured spots. A bald spot is well visible anterior to the anus on the posterior ventral side. The ears are large and rounded. The tail is scaly and covered in fine hairs. The colour of the paws is light grey and becomes creamy-white at the ends. The species has only 34 teeth. There are a maximum of four pairs of teats.

Similar species:
It may be possible to mistake G. aurita with mice (Mus musculus), but it is easily recognisable by its grey and creamy-white short-haired pelage and its long ears.

Behaviour and Natural History:
G. aurita is terrestrial and nocturnal and rests inside fallen logs during the day. During the dry season, it can be found in torpor during the day. It can also enter hibernation during the austral winter. Its vision is apparently reduced and it relies on its auditory and olfactory senses. Its diet shows a marked preference for small insects like termites and ants, although other invertebrate prey is also taken.

Reproduction:
The gestation period is variable, ranging from 54 to 69 days. Litter size is one to five (average three or four). Births occur between November and February. The young are highly altricial - they are born naked with their eyes closed and weigh less than one gram. The eyes open at between 21 and 33 days. The young are weaned after around 35 days.
Unique among tenrecs is the ability of G. aurita females to conceive a second litter while still suckling their first (post-partum oestrous), enabling them to produce up to 10 young a year (average six to seven). This breeding strategy may allow the species to maximise its reproductive output in its unpredictable habitat of western and southern Madagascar, where rainfall is irregular intra- and interannually. 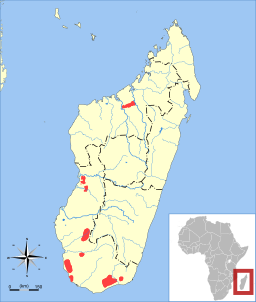 The species has a wide distribution in the dry deciduous forests of western Madagascar, south of the Tsiribihina River and the spiny and gallery forests of the south and south-west. It has also been recorded in rainforest areas at Andohahela in the south-east. Although G. aurita is not known from many sites, it likely occurs in appropriate habitat in between the known localities. The species was also recorded at Ankarafantsika National Park in the north-west by Rakotondravony et al. (2002), a fact which is reflected in the range map above. However, the find has subsequently been assumed to have been a very young individual of Microgale brevicaudata, owing to the fact that it was a newborn animal and thus difficult to determine, and the fact that no other individual of G. aurita has been found during later surveys at Ankarafantsika (Soarimalala, 2011).
G. aurita has been recorded at altitudes between 10 and 225 m.
Garbutt (1999) lists Beza Mahafaly Special Reserve (special abundance), Kirindy Forest and Zombitse Forest as the best places to try to spot this species.

Habitat:
G. aurita occurs in dry deciduous forest, gallery forest and spiny bush. It is also found in anthropogenic savannah outside of forested areas, especially in savannahs with termite mounds, and often rather far from natural forests.

Conservation Status:
Classified as Least Concern (LC) by the IUCN in view of its relatively wide distribution in southern and western Madagascar, its presumed large population and because it is unlikely to be declining fast enough to qualify for listing in a threatened category. The species is rarely found, as it requires specialised trapping techniques (pitfall traps or by hand). However, it is common in owl pellets at some sites. The current population trend is unknown. Many of the forests that this species is found in are under threat from land clearance for cultivation and charcoal production.
This species has been recorded from several protected areas including Beza-Mahafaly Special Reserve, Andohahela National Park, Tsimanampetsotsa RNI and Zombitse National Park. It has also been found in the private concession of Kirindy CFPF. A record from Ankarafantsika National Park still needs to be substantiated.