The Pigmy Hedgehog Tenrec Echinops telfairi has been maintained and bred at the Jersey Wildlife Preservation Trust since 1966. Previous authors have described the management and reproduction of the species here (Ormrod, 1967; Mallinson, 1968; Scaling, 1971; Riordan, 1972; Godfrey and Oliver, 1978).

On July 22nd, 1979, a female Echinops commenced parturition. This continued for more than 24 hours and, in all, 10 infants were born, although one was stillborn. This is the largest litter recorded at the Trust. Litter sizes in the past have ranged from 1-9 with a mode of 5 (n=25) (Godfrey and Oliver, 1978) although Eisenberg and Muckenhirn (1968) record a range of 1-10 with a mode of 7 (n=13). Following parturition, the female appeared weak. This may have been due, in part, to the size of the litter and also, possibly, to an unusually lengthy birth, although Eisenberg and Gould (1966) have recorded an interval of as much as 30 hours between first and last infant.

The condition of the female continued to deterioriate and at 1200 hours on July 25th, it was decided to remove the infants for handrearing. At this point, all 9 infants were still quite strong and all appeared to have suckled. On removal from the mother, they were placed on a hot-water bottle in a box.

The mother subsequently died and the postmortem revealed a uterine infection and pneumonia with Pasteurella sp. being isolated.

The infants were initially given a 1:9 dilution of Nestlé's condensed milk with water, using a 2ml. syringe and a Catac ST1 teat. A further feed of this mixture was given after an interval of 3 hours.

No information could be found on the composition of tenrec milk and the closest comparison available was that of the European Hedgehog Erinaceus europaeus (Ben-Shaul, 1962). Table I shows the composition of hedgehog milk, together with that of various proprietary milk formulas.

Table I. A comparison of the composition of hedgehog milk with some proprietary milks.

From Table I, it can be seen that hedgehog milk is high in fat and protein but low in lactose. Lactol probably has too high a lactose content, whereas S.M.A. is too low in protein and high in lactose. It was decided to use evaporated milk diluted 1:1 with boiled water. However, this is still rather low in protein and Casilan powder was, therefore, added at 3g/100 ml. milk mixture. Initially, sterilised cream was added to increase the fat content but, because of the difficulties encountered in mixing this into the milk, its use was discontinued. Adexolin vitamin drops were added at 6 drops/200 ml.

This formula was fed by syringe every 3 hours and amounts taken ranged from 0.2-0.7 ml. initially and over the next few days increased to 0.5-1.2 ml. per feed. After each feed, the tenrecs were stimulated to urinate and defaecate by gently wiping the ano-genital area with moistened cotton-wool.

On July 29th, two infants died. Postmortem examination revealed congested lungs in both cases and a Klebsiella sp. was isolated from the lungs of one. However, since the mother had been found to have a Pasteurella sp. infection, the remaining 7 infants were given Penbritin syrup (ampicillin). This was added to the milk at a rate of 1 drop, 3 x daily, in the total volume of milk fed to the 7 specimens.

On 1st August, a third individual died and again Klebsiella sp. was isolated at postmortem, this time from the gut. A further 2 infants died the following day and Klebsiella sp. was isolated from the gut of one and the faeces and kidney of the other. It is possible that, because the Klebsiella was resistant to ampicillin, the antibiotic treatment may have enabled the organism to overgrow in the gut and may have precipitated the last 3 deaths. Since the Klebsiella was found to be sensitive to trimethoprin, the 4 surviving infants were given a course of Septrin paediatric suspension (1 drop/specimen 2 x daily) which was given orally by syringe.

Throughout the handrearing all feeding utensils were sterilised between feeds.

The five infants that died had all had a bloated appearance and the Trust's veterinary consultant considered that the interval of 3 hours between feeds may have allowed stasis in the gut to occur, thereby allowing the bacterial infection to take hold. The feeding regime was, therefore, altered so that feeds were given hourly and the amount offered reduced to 0.5 ml. per feed. At this time the milk was given in small, shallow plastic dishes from which the tenrecs lapped readily.

The first solid food was introduced at two weeks. Small amounts of ZF6, squeezed mealworm or waxmoth larva were smeared onto the mouth of the infants, so that they licked at the food. Initially, this was only offered at two of the daily feeds. Although there was little interest at first, two specimens showed a more marked enthusiasm. Over the next two weeks the amount of solid food was gradually increased and the tenrecs were weaned onto a diet of mealworms, waxmoth larvae, chopped earthworms, raw egg yolk, a small amount of soft fruit, pink mice, hardboiled egg and minced chick with chopped heart, liver and kidney. The feeds were given every 3 hours and solids offered on alternate feeds with milk available at all feeds. All these foods were taken well by three of the infants but the smallest was much less enthusiastic, preferring only mealworms and waxmouth larvae. This specimen was encouraged to feed by adding small amounts of the less favoured solids to the insects and by feeding away from the 3 larger infants in order to reduce the competition for food. By 4 weeks, only 2 meat feeds were given. Small amounts of milk were made available at all times, although it was changed regularly and water was also available at all times. At 5 weeks, the milk was discontinued and all 4 infants were taking solids well. Table II shows the recommended feeding regime.

Echinops are born in an altricial state (see Plate 1, Godfrey & Oliver, 1978). On removal from the mother at 3 days, all 9 infants had eyes and auditory meatus closed and, although the spines were visible, they were not developed to any great extent. Eye opening occurred between 8-11 days [this compares to 7-9 days recorded by Eisenberg & Gould (1970) and Godfrey & Oliver (1978).]

At 8 days of age, the infants would roll into a tight ball when handled. Autogrooming was first observed at 10 days.

At 28 days, the special self-marking movement described by Eisenberg & Gould (1970) was first noted. This involves approaching a foreign substance, sniffing or licking at it and salivating slightly. One forepaw is rubbed rhythmically in the substance and the tenrec then rubs the forepaw on its side quills. This behaviour was exhibited whenever a new object, such as a branch, was put into the tank.

Individuals were marked following the methods used by Godfrey & Oliver (1978) viz. indelible ink and spine clipping. This enabled individual weight changes to be monitored. The weights on removal for handrearing ranged from 5.6-9.0g (n=9). Weights were taken daily at midday, prior to feeding. Fig. 1 shows the mean weight increase of the 4 surviving Echinops, with the range of weights indicated at weekly intervals. As would be expected, the range increases with age as weight is gained. Weights taken just prior to torpor ranged from 76.5-112.2g (n=4) when the Echinops were approximately 5 months old. 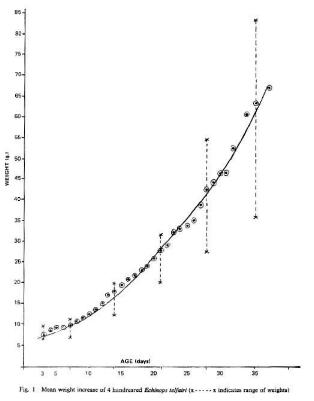 The handrearing of any animal is dependent on 3 major factors. Firstly, the use of an acceptable milk formula. In this case, the evaporated milk:water mixture appears to have been successful and compares with the formula used by Eisenberg & Muckenhirn (1968) in the handrearing of 2 members of the Tenrecidae, the Common Tenrec Tenrec ecaudatus and the Spiny Hedgehog Tenrec Setifer setosus.

The second factor is the frequency at which feeds are given. In the first few days, when feeds were given at 3-hourly intervals, over half of the litter died, due to bacterial infection. Following the change to more frequent feeding, no further losses occurred; however, the remaining infants were also being treated with antibiotic. It is felt that the major factor contributing to the deaths was the stasis of the gut permitted by the lengthy intervals between feeds and that for successful handrearing of this species, frequent feeding is essential. This obviously poses difficulties with such a species, where large litters are common, because of the length of time involved in feeding each individual animal. The litter of nine animals took well over an hour to feed and it is, therefore, doubtful whether a litter of this size could be handreared by one person.

The third important aspect is weaning. This is a gradual process and there was considerable variation between individuals in their readiness to accept solid food.

Products Mentioned in the Text