Oryzorictes talpoides is no longer valid and is synonymous with O. hova.

Description
The general appearance is mole-like, as the English trivial name already suggests. Total length is 147 to 179 mm with a head-body length of 100 to 126 mm and a tail length of 43 to 65 mm. The species' average weight is approximately 42.5 (30.0 to 51.5) g. The pelage is short, soft, dense and velvety (Soarimalala & Goodman, 2011; Garbutt, 2007). The dorsal colouration is generally dark grey-brown and blackish-brown to greyish-brown with a shimmering sheen. The underparts are dark brown to buffy-white. On Nosy Mangabe in the Antongil Bay, light-coloured individuals (albinos?) are frequently found (Soarimalala & Goodman, 2011). The tail is naked and short (50% of head-body length). The forepaws and hindpaws have five large digits. The muzzle is hairless and ends in small nostrils. The eyes are very small. The ears are short (Soarimalala & Goodman, 2011). 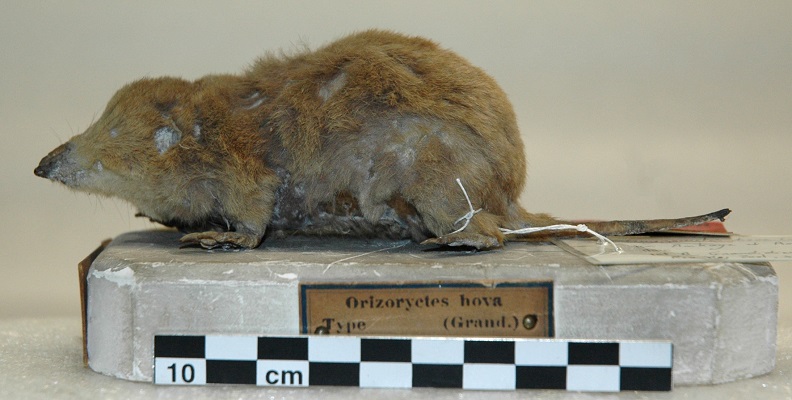 Similar species
O. hova can be mistaken for Oryzorictes tetradactylus, but the forepaws in O. hova have five digits, while those of O. tetradactylus possess only four. The pelage in O. tetradactylus is a lot thicker and less velvety. In general, Oryzorictes species can be differentiated from burrowing members of the genus Microgale (especially M. dryas, M. gracilis and M. gymnorhyncha) by noting the more developed paws and remarkable flat muzzle in Oryzorictes (Soarimalala & Goodman, 2011).

Behaviour and Natural History
O. hova has been observed foraging at ground level using its muzzle to probe beneath leaf-litter and humus. In captivity, it has been observed dragging earthworms underneath the surface of the soil before consumption. The species is widely recognised by villagers tilling rice paddies, when it is disturbed from its burrows. The burrow network is thought to damage crops by uprooting seedlings (Garbutt, 2007).

Reproduction
Based on embryo counts the maximum litter size is four (Garbutt, 2007). 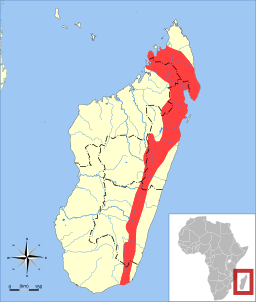 This species is relatively widespread in the eastern rainforest belt, from Andohahela in the south to Masoala in the north, including the island of Nosy Mangabe and into the Sambirano region (Manongarivo). In the central highlands of Madagascar it has been recorded in forest fragments (Ambohitantely). It is known from between 140 and 1,990 m of altitude (Stephenson et al., 2016; Garbutt, 2007).

Habitat
O. hova inhabits a variety of environs, ranging from lowland rainforest to sclerophyllous forest approaching the tree line. Outside forests it has been recorded in bottomlands, including natural marshes and those converted to rice paddies. It is also found in disturbed habitats, such as the edge of gardens and in fields. It is a semi-fossorial species (Stephenson et al., 2016; Garbutt, 2007).

Conservation Status
Classified as Least Concern (LC) by the IUCN in view of its wide distribution, presumed large population, presence in a number of protected areas, as it has tolerance to a degree of habitat modification, and because it is unlikely to be declining fast enough to qualify for listing in a threatened category. Therefore, in spite of ongoing loss of tenrec habitat across Madagascar it is not thought that this species is currently threatened. Based on standard trapping techniques, it appears to be an uncommon species. The main threat to O. hova is drainage of suitable wetland habitat (for example, through conversion to urban areas). The current population trend is deemed to be decreasing. The species has been recorded in many protected areas including Marojejy National Park, Anjanaharibe-Sud Special Reserve, Manongarivo Special Reserve, Mangerivola Special Reserve, Ambohitantely Special Reserve, Analamazaotra Special Reserve, Andringitra National Park, Pic d'Ivohibe Special Reserve and Andohahela National Park (Stephenson et al., 2016).