On the basis of molecular data indicating that this species and Talazac's shrew tenrec form a sister group to the rest of Microgale, these two species were transferred from Microgale to Nesogale (Everson et al., 2016).

Description
The species is a large shrew tenrec with a total length of 212 to 270 mm. Its head-body length is 105 to 126 mm and its tail length is 103 to 143 mm. Its weight is 25 to 45 g. The upperparts are brown with a buff wash and sometimes more reddish areas around the throat. The underparts are mainly grey with a buff or reddish wash. The pelage is quite long. The tail is grey dorsally and buff ventrally. There is often a fat deposit at the base of the tail. The ears are particularly long. The fore- and hindpaws are buff, the digits can be whitish. There are three to four pairs of mammary glands. 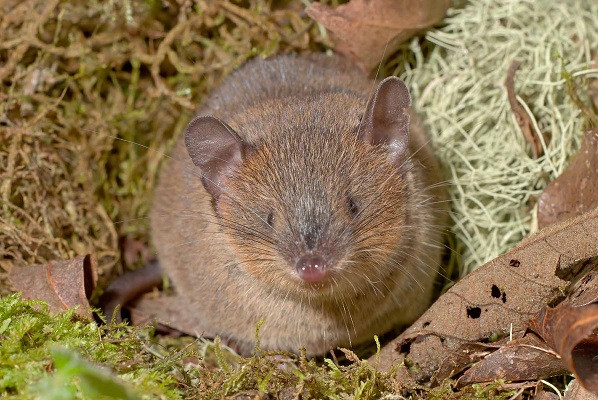 Similar species
The species is often mistaken for Nesogale talazaci, especially at a subadult age, but N. dobsoni can be differentiated by its shorter mouth and tail. As adults, N. dobsoni and N. talazaci can be told apart by the smaller size of the former species, especially with regard to its tail length. The two species often occur in sympatry.

Behaviour and Natural History
N. dobsoni forages on the ground among leaf-litter and detects its prey by sound. There is also some basic evidence for an echolocation system aiding movement through the undergrowth and in the dark. It is a solitary species with some territorial behaviour. Individuals are highly antagonistic towards one another, with fights not uncommon. An aggressive behaviour towards other tenrec species has also been reported. N. dobsoni attacks and sometimes eats members of Microgale species (Soarimalala & Goodman, 2011). However, Stephenson et al. (1994) report that Nesogale dobsoni were generally more passive in captivity than N. talazaci and that individuals rapidly became habituated to handling. Females showed no adverse behaviour towards the litter, even if the offspring were touched within the first few days after parturition.
This species accumulates fat reserves in the body and tail prior to the austral winter. The body weight may increase to over 80 g. However, it does not enter full torpor at the onset of winter. It does, however, become inactive, constructing a nest and sleeping for much of the time, eating less and lowering its body temperature (Garbutt, 1999). 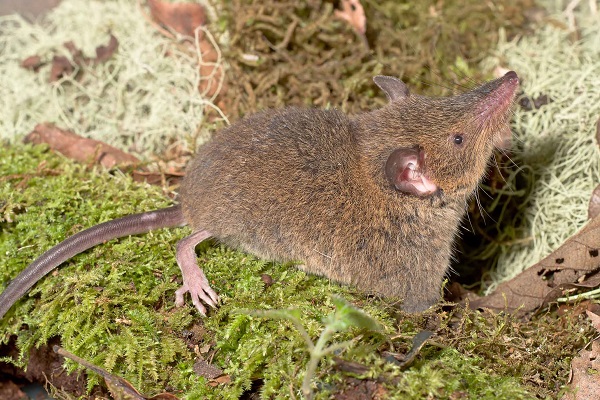 Reproduction
Males and females may establish a stable relationship during the breeding season in the austral spring/summer. The gestation period is approximately 58 to 64 days. A maximum of six young per litter are born. The female builds a nest from dead leaves, dry herbs and twigs. 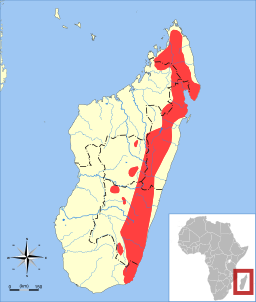 The species has a large distribution from the extreme north-west and north of Madagascar (Montagne d'Ambre, Tsaratanana and Manongarivo), through the central high plateau and on the eastern escarpment up to the extreme south at Andohahela (Parcelle 1). It occurs between sea level and 2,500 m of altitude.

Habitat
The species adapts to all types of habitat including lowland and montane evergreen rainforest, mountain sclerophyllous forest, forest margin habitats, pine plantations, heavily disturbed areas, agricultural land, and non-forested regions of the eastern escarpment. N. dobsoni is not particularly sensitive to disturbance and degradation. It is frequently common in degraded areas where other small tenrec species may be absent. It is one of the species found at the summit zone of Andringitra, characterised by hard-leaved forest between 2,000 and 2,050 m. There, it resists temperatures descending to -7° C and sometimes snow.

Conservation Status
Classified as Least Concern (LC) by the IUCN in view of its wide distribution and presumed large population. Nesogale dobsoni tolerates a degree of habitat modification and occurs in a number of protected areas (Marojejy National Park, Manongarivo Special Reserve, Ankarafantsika National Park, Ambohitantely Special Reserve, Andringitra National Park, Pic d'Ivohibe Special Reserve, Kalambatritra Special Reserve and Andohahela National Park. Therefore, in spite of continued habitat loss it is unlikely to be declining fast enough to qualify for listing in a threatened category. It is an abundant species, and in some sites it is the most commonly trapped tenrec.