Description
The species is characterised by its very small size and relatively long tail. Head-body length is 47 to 56 mm, which is shorter than its tail length of 65 to 77 mm. Weight is 2.5 to 4 g. The dorsal fur is reddish buffy-brown and grizzled while the ventral fur is grey-brown, with an abrupt and noticeable transition between the dorsal and ventral colourations. The back paws are brownish but the lateral part is tawny. The tail is dark grey-brown on the dorsal side and distinct from the ventral portion which is slightly paler (tawny).

Behaviour and Natural History
The species forages on the ground and in the lower branches of undergrowth. No other details are known.

Reproduction
No details are known. 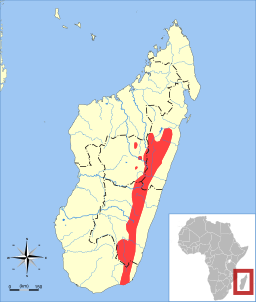 The distribution of Microgale pusilla is known from a variety of localities within the eastern rainforest belt and on the central plateau (e. g. central forests of Ambohitantely and Ankazomivady, central-eastern forests like the Mantadia-Zahamena region up to the Andringitra mountains). The species is known from 530 to 1,670 m of altitude. According to Garbutt (1999), records also exist from forest remnants on the Mahafaly plateau in south-west Madagascar (not shown in distribution map).

Habitat
Microgale pusilla occurs in intact or disturbed evergreen rainforests, ranging from low altitudes to mountain rainforest. Occasionally it is recorded near paddies and in swampy areas close to forests. Its remains have been found in Barn Owl (Tyto alba) pellets close to Antananarivo in highly modified habitats including anthropogenic grasslands.

Conservation Status
Classified as Least Concern (LC) by the IUCN. It is relatively common in suitable habitat. The ability of this species to live outside forests suggests it may not be declining as much as other species of Microgale. It has been recorded from at least three protected areas: Ambohitantely, Analamazaotra and Mantadia.