Description
The species is a medium-sized shrew tenrec with a total length of 115 to 160 mm. Its tail length is 66 to 78 mm and its head-body length 65 to 77 mm. Its weight is approximately 11 g. The upperparts are dark grey-brown to dark rufous-brown with some yellowish speckles. M. drouhardi displays a characteristic and distinct dark brown mid-dorsal stripe from the head between the ears to the base of the tail. The underparts are silver-grey with a buff or reddish-buff wash. The transition from dorsal to ventral colouration is moderately distinct. The tail is dark brown dorsally and buff ventrally. The hindpaws are buff dorsally and dark grey-brown laterally and ventrally.
A considerable degree of size variation between populations has been described (Garbutt, 1999), with those from central-eastern regions (Ambatovaky and Zahamena) generally smaller than those from other localities.

Similar species
The overall appearance is similar to M. cowani and M. taiva, but M. drouhardi is paler and easily recognisable by its distinctive dorsal stripe.

Behaviour and Natural History
The species hides under leaves and vegetation on the forest floor. It is very active, however, and can move rapidly beneath this layer. No further details are known.

Reproduction
No details are known. 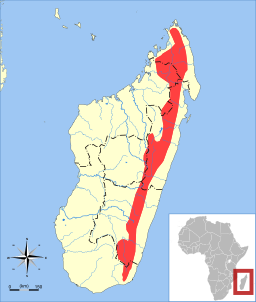 The species has been recorded from a number of localities in the north (Montagne d'Ambre, Manongarivo, Tsaratanana, Makira, Daraina (Loky-Manambato) and Marotandrano), north-east, central-east and south-east (Anjanaharibe-Sud, Ambatovaky, Zahamena, Andasibe, Mantadia, Ambatovy, Maromiza, Lakato, Andringitra, Ambalavao) of Madagascar. Recently, the species has also been recorded in the Masoala peninsula. Its distribution is not continuous, however, with an apparent absence in the Ankaratra region, Tsinjoarivo, Fandriana-Marolambo and Ankazomivady. It is common in the Ranomafana region up to Midongy-Sud which constitutes its southern range limit. Occurring from 300 to 2,500 m of altitude, it has the largest known elevational range of any Microgale species. A high proportion of specimens has been collected in valley bottoms.

Habitat
Microgale drouhardi occurs in evergreen rainforests which can be relatively intact or degraded, ranging from low altitudes to the upper limits of mountain forests. It is especially common in mountain rainforests.