Similar species
The species is very similar in appearance to the Greater Hedgehog Tenrec (Setifer setosus), but smaller and with a slightly less pointed snout (Garbutt, 2007). The quills in E. telfairi are slightly longer and less uniformly arranged. The two species can also be differentiated by their dentition: E. telfairi has only two molars in each jaw (total number of teeth: 32; incidentally, this is the most reduced dentition in the Tenrecidae), while S. setosus has three molars in each jaw (total number of teeth: 36).

Behaviour and Natural History
The Lesser Hedgehog Tenrec is nocturnal, generally terrestrial, and sometimes semi-arboreal. It is a good (albeit slow) climber on tree trunks and branches, using its claws and its short tail as a brace (Garbutt, 2007; Soarimalala & Goodman, 2011). It is generally solitary, and males may be very aggressive towards one another, but males and females are more tolerant towards each other (Garbutt, 2007). E. telfairi forages alone in dense shrubbery, feeding mainly on adult insects and larvae. Vertebrate carcasses are also sometimes eaten (Soarimalala & Goodman, 2011). During the dry and cold season, when food is scarce, E. telfairi enters hibernation for three to five months during the period of May to September. It sleeps in hollow logs or tree holes, up to several metres above the ground. Its nest is lined with grass and leaves, which are carried in the mouth and arranged to form a neat cup (Garbutt, 2007). The species' anti-predator response is to roll into a tight ball and emit hisses and grind its teeth (Garbutt, 2007).
The longevity record in captivity is 17 years (Kupitz, 2000).

Reproduction
Mating season starts in October, shortly after emergence from torpor. Females build a nest a week before birth. The gestation period is 60 to 68 days and litter size is one to ten, with an average of seven young. At birth the young weigh about 5 to 10 g, the quill tips are under the skin, the eyes and ears are closed. After a few days the young are covered with quills, the eyes open around day 7 to 9. About a week later (or a little earlier) they start to leave the nest temporarily. At two to three weeks the first of the young start to take in solid food. They are independent in just over a month and sexual maturity is reached after the first period of hibernation (Garbutt, 2007). 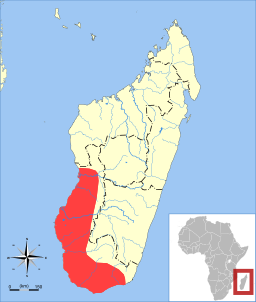 The species occurs in abundance in southern and south-western Madagascar, getting rarer further north, with the Tsiribihina River marking its northern limit of distribution (Soarimalala & Goodman, 2011). It has also been recorded in southeastern Madagascar (Goodman et al. 1999). The altitudinal range is recorded as zero to 1,300 m above sea level (Stephenson et al., 2016). According to Garbutt (2007), Berenty Private Reserve, Anjampolo Spiny Forest, Parcels 2 and 3 of Andohahela National Park, and the spiny forests around Ifaty (north of Toliara) are the best places to try to see this species.

Habitat
E. telfairi lives in dry deciduous forest, xerophytic spiny forest and gallery forest. It has also has been found in open grasslands tens of kilometres from forest, including in disturbed habitats of non-native vegetation (Stephenson et al., 2016; Garbutt, 2007).

Conservation Status
Classified as Least Concern (LC) by the IUCN in view of its wide distribution, presumed large population, as it occurs in a number of protected areas and has a tolerance of a degree of habitat modification. This species is relatively common where sampled (Stephenson et al., 2016). E. telfairi is hunted as a game animal for consumption, especially in the more arid zones of the south-west (Soarimalala & Goodman, 2011). It is known from several protected areas, including Zombitse-Vohibasia National Park, Andohahela National Park, Beza Mahafaly Special Reserve and Berenty Private Reserve.